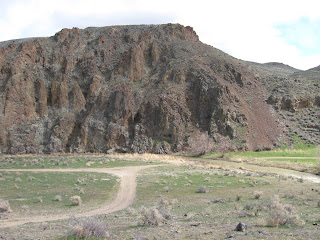 Andi & I rode today at Succor Crk Canyon, west of Homedale. She had her old endurance gelding, Cas, who is 24 this year and he had a great time. Ears were up as he trotted along, I think he was smiling! The grass is starting to grow and the creek is filling the canyon, flowing fast and furious. I don't recall seeing that much water in there before. Andi spotted a deer on the way out there, lots of birds, cows and some ground squirrels. The other day I heard curlew but I think it was too windy for them today. The two of us don't get to ride together much these days so today was pretty special.
Posted by Karen B at 8:45 PM No comments: Links to this post

Easter Sunday we rode all afternoon and never found the Easter Bunny. He was busy somewhere other than the brushy hills and canyons we were riding. But the sun was shining, the howling wind laid down and we had a beautiful ride. Joe was on Thunder, ponying Scout, who was packing 200 pounds of salt back into the cows. They were doing the work, Thunder kept getting Scout's leadrope under his flagging tail. Josette, Linda and I were just along for the ride and the scenery. The snow fields were melting and the creeks starting to run. The salt was unloaded on the hillside and all the cows were present and accounted for in their 1500+ acre allotment. We had our Easter picnic then headed back home.
Posted by Karen B at 8:38 PM No comments: Links to this post 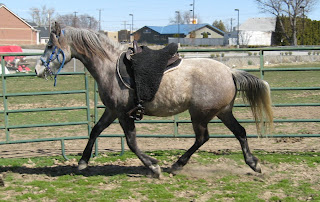 The time has come for Thunder's younger cousin, Z Blue Lightening, aka Blue, to start his training. It actually started last spring but then got put on hold and he just kept eating. Last week he got saddled and bitted and played with a little. Today we saddled and played with stirrups and things that make noise and made him nervous. Then Blue got the bit and we worked with giving to the bit. Yup, someday he will be a grown up horse and he'll get to see his share of the trails too.

Posted by Karen B at 1:12 PM No comments: Links to this post

Putting the Cows Out 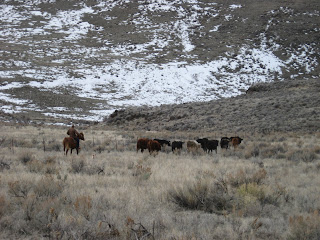 It's the time of year to take the cows from the ranch and send them to the high country in the Eastern Oregon Owyhee range south of Adrian, OR.. If you have never heard of Adrian it is the Capital of Eastern Oregon. (LOL!)

Here is a picture of joe Nebeker on my Arabian gelding, Z Summer Thunder, heading cows up to the gate. This was the first time Thunder had been ridden since our mishap in November. He did fine! We trailer up within about 4 miles of the gate, unload and head them uphill through the canyons, snow, mud and creeks to the hills they will call home for the next 6 weeks. We found some pretty big snow fields with some deep drifts along the way. Thanks to the weather they are going out later than usual but at least they are out. Sunday was a nice day for a long ride! It has been a terribly long winter and we have all had "cabin fever". The four of us had a great time!
Posted by Karen B at 8:47 PM No comments: Links to this post

I often ride out in the Wilson Creek area of the Owyhees. And while I am aware that some people really dislike the wild horses, I enjoy seeing them. Reminds me of all the old horse stories I read as a kid. Yes I know, some of never grow up. After last summers round up, I sure haven't seen many, but there are a few here and there. Here is a pic that I took Feb 10 of a threesome in the area. I sure miss seeing the old red stud. Maybe before they head for the high country I'll see if this mare has foaled or not.
Posted by Karen B at 7:38 PM No comments: Links to this post