Have Camera Will Ride 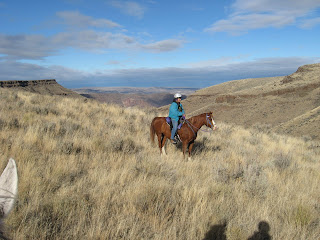 Josette took this of Thunder and I near the top of the ridge. I lik the scenery in the background. Down in the V - deep in the canyon and not visible in this pic- lies The Owyhee Reservoir. 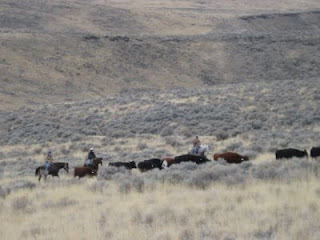 This is Lily, Tammy and Joe bringing up some cows. We found them between those two rocky ridges in the background. What a ride! :-)

Oh yes and we saw those deer too, and this time I got their picture! Eight muley's climbed up over the rocks and stopped to study Linda and I. The horses studied them back and after watching them for a minute it was time to get over to the draw that we were supposed to be waiting in for cows.

Posted by Karen B at 6:49 PM No comments: Links to this post

Fall Roundup or Work off that TURKEY!

Fall means bring the cows back in - again. They get 6 weeks out on the BLM in the spring and another 6 weeks in the fall. That's a lot of work driving them out and bringing them back in. We'd ridden out to check on them a couple times and they were usually around the salt, laying down, chewing their cud.
Two days after we all filled up on turkey and taters, we are out there riding it all off looking for cows. Joe and Josette both thought they'd be in the salt area. Yeah right, that's be too easy. And when we got there, not a single cow. So we split up to do some brushpopping.
The grass was still plentiful, the rocks had not gotten any smaller, in fact I think they had multiplied. The hills were steep and steeper, nothing easy about this part of the Owyhees. We found eight in the same place Josette and I found them last spring, on a narrow hill top. We took them out a bit different route, easier, if there is such a thing in the Owyhees. We reached a gate just about the same time Joe came up with his six from the opposite direction. This was Blue's first gathering and he was herding them along all by himself. Our goal was to keep them from mixing with the other ranchers cows as we crossed the grassy prairies. Tammy and Josette had gone ahead to "sweep" the trail, but three strays spotted the herd and came racing in. Yes cows can run and these three frolicked and acted like they had found long lost friends when they met our bunch. They hung around for a couple miles then when the three of them were altogether again, we cut them out and they mosied off in the other direction.
The sun was going down as Linda and I topped the saddle ahead of the cows, where we rode down into the draw so we could be block the upper part of the draw from the cows. From there it was less than 1/2 mile downhill to the catch pens and trailers. They were spooking a bit until Ace through some alfalfa out and one cow thought that looked real good. Once she moved in, so did the others. Then it was close the wings of the pen and load them up. It was almost dark. These short days don't give us a lot of time. The horses had worked hard on those steep hillsides, we gave them a short rest and water before loading up and going back to the farm. We celebrated a long but safe day with some good food and good cheer; we'd played hard and worked harder, but dang it was a good day!!
Posted by Karen B at 6:16 PM No comments: Links to this post 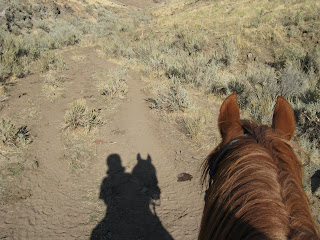 I've been offline for awhile (moving!) but not out of the saddle. So although you may not hear from me it doesn't mean that I am not out there doing something. I ride every chance I get! And I grab that chance and milk it for all it's worth, squeezing every bit of daylight possible out of these short days.

Fall offers some nice opportunities for riding, some folks like the cool temps but I always miss summer. The high desert is always interesting no matter what time of year. The cows went back out for the fall and then we made a pack trip out with salt. Since I didn't have the pack horse I entertained myself with the camera and a shadow on the way back down the draw. Since this picture it has rained enough to muddy the trail and make the creek flow. Last fall we had a herd of mule deer above the rocks watching us. All we could see was heads and ears peering out over the rock ledge. Of course I didn't have my camera that day and we haven't seen them since either. But my camera always seeks out picture possibilites.
Happy Thanksgiving everyone. I'll be out after TG dinner to try and ride off some calories!

Posted by Karen B at 2:16 PM No comments: Links to this post