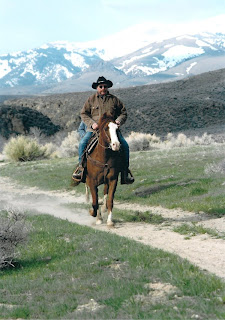 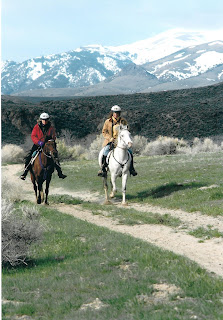 This was the weekend for the Owyhee Tough Sucker endurance ride in Oreana, Idaho. I've been riding quite a bit the last 6 weeks and my friends and I decided to go to an endurance ride. Here I am on Rushcreek Hollie with Josette Beaumont and her gelding, Oyhe Elvis. Despite the cold wind blowing off those snowy mountains behind us, we had a great time. This was Elvis's second 50 and Hollie's first 50 in a few years. We were about 7 1/2 hrs and the horses looked great. I was the slow one in this equation.

Thunder was ridden on the 50 by Joe Nebeker (other picture). They Top 10'd and I think he was the second Heavyweight. For sure he was the first rider with a big western saddle and cowboy hat. :-) This was Thunder's second 50 and he thinks he is the toughest horse on Earth! He was ready for another 50 as soon as he was completed. What a horse! They really moved out the last 10 miles and finished in around 6 hrs 40 minutes.
Posted by Karen B at 2:02 PM No comments: Links to this post