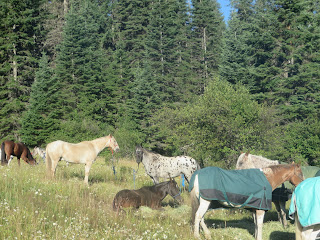 This had to be the fastest week ever! It seemed like I had barely left when it was time to say goodbye to my friends for another year, and we all load up and go home. To describe this years
experience I could overuse the word "amazing" very easily. We had our ups and downs, it wasn't perfect, but as someone said, "We weren't living in teepees and when we get to camp dinner will be ready for us!" Truer words were never spoken. It's all an adventure. 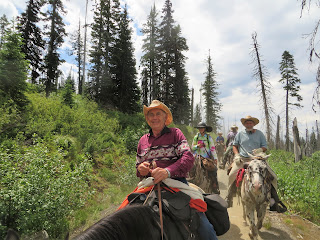 The Chief Joseph ride began in 1965 and this was the 55th year, taking place over the third segment of the trail. It takes 13 years to complete the entire trail and it averages 100 miles a year. This years total by an average of several GPS' was 113 miles!! Last year we ended at Tolo Lake near Grangeville, ID, and this year we ended at the historic Musselshell Meadows. We rode through thick forests with magnificent views through the trees, old burns, beautiful wildflowers, along scenic rivers, historic routes and places. Each night we had Nez Perce speakers to learn the history of the events and places along the way. 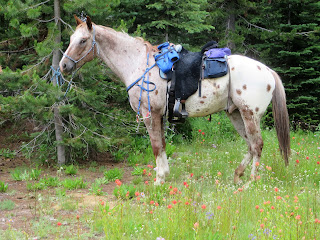 Our volunteer trail crews worked very hard to pull this one together as the snow melted late. They worked on trails every weekend for over 2 months. Thank you to Andy Shaw, AJ Smith and Ervin 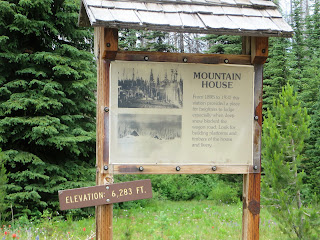 Gross for all your work, and all the others who joined in to help them. Unfortunately Ervin was injured doing all this and then was unable to be there to share the week. His family did bring him up Friday afternoon and he got to visit with a lot of folks, which should help speed the healing process. So MANY volunteers on this ride that make it work and I can't begin to name them all. Imagine a point to point or progressive ride where EVERYTHING is loaded up daily and moved. The kitchen, dance floor, potties, water, you name it and it moves to the next days camp. AND we leave no trace as the camp ground and picket area is left spotless!

Words simply can't describe this event, one has to experience it. To those who think this is a simple trail ride, then come join us and you'll discover it is so much more! Next year is Lolo, which will be a true challenge in the tradition of the Chief Joe!

Today I was lucky enough to witness a rare and beautiful sight. Wild horses being returned to their home land! It was enough to bring tears to your eyes as the horses came off the trailer, sized up the line of spectators, gave us a show of their spirit and then ran out of view into the hills. 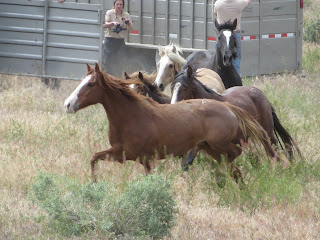 Deep in the Owyhee Range of SW Idaho lies a Wild Horse Management Area named after a nearby creek, Hardtrigger. Wild horses have been in this area for many years and I have been lucky enough to observe them since around 2005. Horses of all colors were hidden amongst the hills and washes of the country side, and if you knew where to look, you could find them. 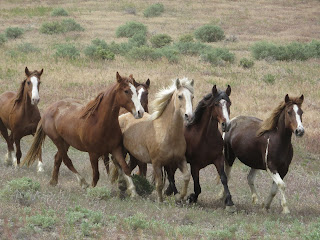 In the summer of 2015 one of the nations largest wildfires, the Soda Fire, swept through the Owyhees, burning over 279,000 acres and unfortunately taking the lives of wild animals with it. Occasionally a green patch was spared and it held survivors. But without feed they wouldn't live for long, and an emergency gather was planned. Off the three ranges, Black Mountain, Hardtrigger and Sands Basin, 279 horses were brought in.  The horses were sorted, some adopted, some picked out for return, some still remain in holding waiting for adoption. The horses destined to return were cared for by the BLM at the Wild Horse Corrals in Bruneau and Boise. 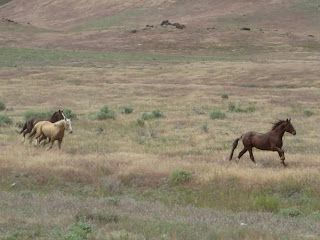 A herd was released in 2018 to the Sands Basin area. Now in 2019, a total of 14 horses would be returned to Hardtrigger HMA. I was amazed at the number of people who came out to watch this rare event. I didn't count but there had to be at least 200 people, including the local news and media. Everyone was lined up anxiously awaiting the arrival of two trailers of horses as the sky grew darker and the thunder rumbled. 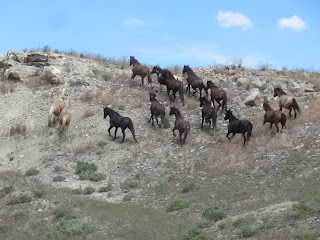 The first 7 returned to freedom were all mares. And not far behind their release came the 7 stallions from the other trailer. These horses have been cared for by humans for nearly 4 years, they aren't real timid, but it didn't take them long to see the freedom that lay ahead, and for them to scramble up the hillside and disappear. 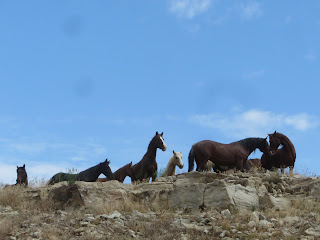 Amazingly, a few were curious enough to swing back and give us one more look at their magnificence before saying goodbye and disappearing into the hills. It'll be fun to go back and look for them another day.
Posted by Karen B at 1:46 PM 1 comment: Links to this post