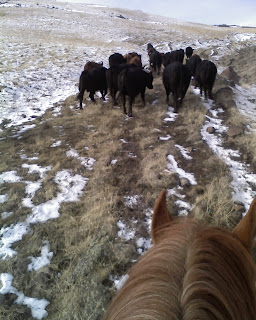 Wow didn't we just bring them in? Seems like it but here we are behind 30 cows and bulls heading back out to the BLM allotment. For January it was a pretty nice day. We had some fog, some sun, no wind which was a blessing! Only one flat tire on the way up out of 5 trucks and trailers. Not bad! Fine little ice crystals hung on everything. The creek was frozen solid including the little water falls.
Oh where was my good camera? Forgotten. But I at least had my trusty camera phone. Technology on horseback. You can ride along, send a text, take a picture or call someone if you have a signal.
We were all loaded down with warm clothes and well prepared. We had less snow this winter up there. Last year we were crossing big snow fields. There was a bit of ice though. Blue splayed out in front and just went down on his nose but got back upright without going down all the way. We laughed that he looked like Bambi on ice! He didn't like Ranger behind him after that either, maybe he thought Ranger pushed him. :-)
It was a good day to get out. A nice easy drive, only took three hours which has to be a record. I told Joe we are either getting good at it or the cows are! Fourteen of them did know the way which helps a lot.
Yup once the cows go out that means spring is right around the corner. HOORAY!

Posted by Karen B at 7:18 AM No comments: Links to this post