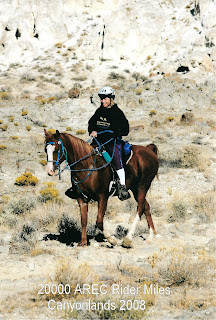 Steve Bradley took this photo at Owyhee Canyonlands and presented me with it as a memento of riding 20,000 AERC miles. Pretty cool since I wasn't sure if I'd ever reach that mileage after last years wreck. But here I am with Thunder, riding and having a good time thanks to a lot of help from good friends.
An interesting note is that my first ride was on a blaze faced chestnut in 1977. Now many years later and several horses of various colors, I am surpassing my 20,000 mile mark on a blaze faced chestbut horse. I guess some things never change.
Owyhee Canyonlands is a 5 day multi-day ride put on by Steph & John Teeter in Oreana, ID. The first 3 days were large 50 plus mile loops, the last two days were smaller repeat loops in and out of camp. I had entered days 1, 2 and 4. My favorite trails are the long loops that begin and finish in camp, with out vet checks. These long loops give me more time to explore new lands and they also test your horsemanship more than small loop trails that keep returning to camp. I feel this makes my horse and myself a better team.
Day 1 was the Castle Creek 50, and the trail took Josette and I out through the Browns Creek Canyon to Castle Creek. Thunder was a good boy, no bucks! The trail was fairly rocky with some technical footing here and there but nothing our horses weren't used to negotiating. A lot of people were dreading the beaver pond but since we had crossed roaring whitewater in July our horses thought little of the pond. They did enjoy a good drink of water as they waded through. We were given some magnificent views of the Castle Creek gorge, some awesome rock formations and interesting country even though the desert is pretty dry still after last weeks rain. We trotted past an old homestead cabin and one dugout underground dwelling or cellar. 39 started, 37 finished and I believe our time was 6 hrs and 40 min for the 50 miles. The cold morning kept the temps down, it really didn't feel too warm until about 2 PM, but the weather was great, certainly better than that thunder storm we rode in last Saturday.
The Wild Horse Butte 55 miler was the second day. I rode mostly with Karen Steenhof and Thunder was excellant. Anytime he spotted horses ahead he wanted to hurry and catch up but he was at least behaving himself. We rode through sections of the Snake River Birds of Prey area where we did see one Harrier circling through the sky. The trail went along the edge of the Snake River where Thunder got a drink, circled Wild Horse Butte, and then returning over portions of the Oregon Trail. It was a really nice day, not too hot with a bit of cloud cover. The footing was better than the day before but I thought occasionally Thunder would wince on a rock. We finished the 55 in 6:33, 17th out of 30 starters. We were OK'd to go again the next day but I thought he'd had enough rocks. So we just did two days and had a really good time!
Friday morning I saddled Thunder up and we went out for an enjoyable little ride with Terry McDonald and her friend Kris. Now Terry and I go WAY back and we rode together in the early 80's on the Lost Wagon Train multi-day. So we had a bit of catching up to do. The nice thing about endurance riding is meeting up again with old friends and always making new friends. After our ride I helped at the vet check in camp and pulsed and ran a few errands. There were lots of helpers that enable rides like this to happen. Thanks Steph & John for a good ride!! VIVA 50 mile loop trails!!!!!! 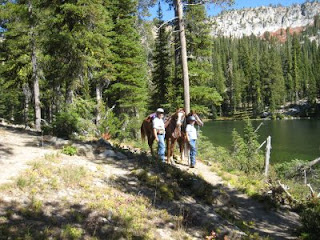 Here is Linda and I at the shore of Jennie Lake, 7850 feet elevation, near Jackson Peak. We figure as the end of Sept. gets closer that it is going to be harder to ride in the mountains and we wanted to get in one more ride to a lake if we could. This was a great little ride, not too tough, a lot of climb going up of course but we thought it was pretty easy. The trail follows Bear Creek and is 9.2 miles round trip from the trail head. We parked on road 348 and then rode to the trailhead and then on up to the lake, giving us a few extra miles. The crystal clear waters were so pure we could see the fish swimming around out there. There were a couple people camped and fly fishing. What a gorgeous little spot!

Posted by Karen B at 6:41 PM No comments: Links to this post