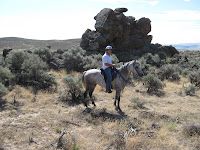 The weather has been HOT but the riding goes on. You just try to start earlier and take more drinks with you. That drinking thing is really important - even tho I drank a LOT yesterday, I was still dry from the heat. An endurance rider can't hide from the heat because when you are on an endurance ride and it gets hot, you have to be prepared. Besides I always figure it'll make me stronger in the long run and MAYBE I'll sweat off a pound if I'm lucky.

Today Blue and I did the 12 mile loop and he is just getting better and better all the time. He is going to be a fun horse to ride. Blue is very sensitive, still a bit fussy about wanting his rider centered and not messing around with stuff when you are trotting along. When he starts wiggling those ears back and forth you better take a deep seat and stop playing with what you were playing with.

I was quite impressed with him last week in the storm though because when he started to play and act up, all I did was say HEY and touch the reins and he stopped! Most horses would have kept playing around and dancing for a few minutes but he listens pretty well. He reminds me a lot of old Zap, he's better behaved but he moves effortlessly like Zap and he cools down well like Zap. In a year or so maybe I can take him on a 100 miler and we'll see. :-)

Posted by Karen B at 2:19 PM No comments: Links to this post

Yesterday was a Two-For-One day of riding! Took both Blue and Thunder and hauled over to Joe's. I met Linda there and we took Thunder and her mare Ari for a ride. Blue was left tied to the tree and her mare, Ellie, was at her trailer. We headed out blazing trail through 6 foot tall Kosha weed along the fenceline then headed towards the canal and the hills on the other side. There are some good climbs over there and normally decent footing for trotting all the hills and giving the horses a good workout. There were some washouts and ruts from June's flash floods but it wasn't too bad. The bigtime consuming factor were the gates. The rancher had tightened and done some work on several of them and they took forever to open and close. Take several gates that take up ten minutes each and it's easy to add an hour to your riding time! But we had a great ride and the horses worked up a good sweat and it didn't get too hot. We got back and took care of those two then went down to visit with Linda's mom. That gave us a nice break to drink up and get ready to go again.

Now it was Thunder's turn to stay tied at the tree while we trailered down Succor Creek Rd and did our favorite loop down there. Blue and Ellie had never been ridden out together before and they eying each other and a bit leery of going side by side at first. This area took a big hit with the flash floods with wide swaths of damage. Some of the landscape was totally rearranged and we need to make a few new trails. Blue handled the washouts well and didn't spook at the piles of dirt, sagebrush and rocks like Thunder does. Linda's mare handled fine too and Blue kept looking at his new friend wondering to himself, she's red like Thunder but she doesn't chase me.

It sure was nice to get both horses ridden in one day. Feels like i did an endurance ride after riding two hroses in one day! I find it tough to have the time to keep both young horses going. It takes a lot of work, discipline and dedication. But Blue is going to be a really nice horse. I forgot my camera though, that was a bad thing because I always see something and wish that I'd had it. Today we are having some storms go through so may not get in a ride this afternoon afterall.
Posted by Karen B at 12:02 PM No comments: Links to this post