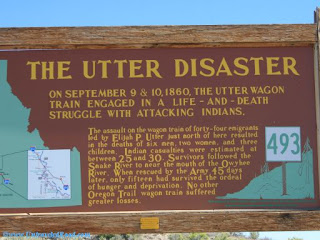 Halloween weekend. The final Northwest ride for 2010. A 2-day event of sand, rocks, gopher holes, gravel roads, sagebrush, canyons and a few stray trees not far from the Snake River and Oregon Trail.
PLUS a history lesson. This was the land of the Utter Disaster, often referrred to as one of the worst Indian attacks on the Oregon Trail. On September 9& 10, 1860, the Utter/Van Ormen WagonTrain engaged in a life-and-death struggle with attacking Indians near Castle Butte.
The assault on the wagon train of forty-four emigrants led by Elijah P. Utter resulted in the deaths of six men, two women, and three children. Indian casualties were estimated at between 25 and 30. Survivors followed the Snake River to near the mouth of the OwyheeRiver. When rescued by the Army 40 days later, only fifteen had survived the ordeal of hunger and deprivation. This sign is posted on Hwy 78 near Wees Rd. 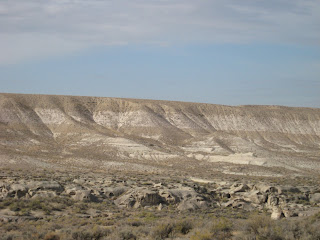 It's an amazing story!
I opted to ride the 75 miler because it was a big 55 mile loop out to the Birch Creek Canyon and the Wind Caves. I wouldn't have a bunch of little loops in and out of camp, which for me is a big bonus because I don't like a lot of loops. And my big treat for the day was the Wind Caves along the big sandy wash of Birch Creek. These are awesome formations with big holes a person can easily crawl through. I wonder if the Indians ever used them. The formations resemble a pile of skulls from a distance. Quite fitting for Halloween and it looked like they belonged in an Indiana Jones movie! Birch Creek Canyon and it's many rock formations was great also but I was busy watching trail and footing and found it hard to ride with camera in hand. I'd like to go back for a day ride and take lots of photos.
Thunder gave me a fine ride on the 75. Back in camp for the final vet check my riding partners both got pulled. This left us 12 miles to go by ourselves, creating a new adventure. I wondered if Thunder might miss his buddies and be reluctant to leave camp? Nope! He didn't even look back and cantered happily down the trail. We trotted as much as we could and it got dark on us about 45 minutes out of camp. I'd ridden Thunder in the dark before but not just the two of us. It's a great experience trotting along, trusting your horse to judge the footing and choose the pace. I was pretty proud of him as he did fantastic! John Teeter did a superb job of putting out glo sticks so I never questioned where the trail went. I did finally turn my light on for the last couple miles as we went through some gates and I wanted to be sure to stay out of any wire. I didn't need to worry about gopher holes because Thunder wasn't going near any of them. We finished about 8:50 PM, I think we were 6th out 8. Not great by some folks standards but I'd finished on a sound healthy horse that could have gone farther! True to form he gave me only one buck for the ride - thats my boy! Some days I get several. It was a great wrap up to a successful ride year.
Posted by Karen B at 6:30 PM 1 comment: Links to this post