Will the Leader Please Step Forward

After Monday's incident of basically telling the horse, "I don't want to lead any more, it's your turn.", we have been practicing with me as the leader and him as the follower. And in order to do it well I had to think about what defines a leader in a horse's eyes. 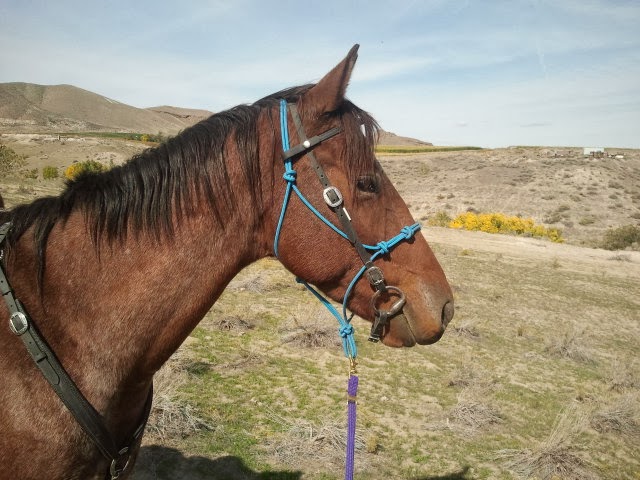 As herd animals, the leader keeps them away from harm (predators) and guides them to sources of food and water without falling into horse eating holes or entering a cave where a monster could reside. It means my horse has to think I am bigger, badder and better than any scary thing that he may encounter on the trail. My horse has to view me as a teacher and protector. No big deal you say? Consider this, we don't speak the same language so how do we communicate that we are bigger, badder, better than the trail monster blowing balloons bobbing up and down in the wind or flying tumbleweed at 40 mph? That all goes back to two things, desensitizing the fear and controlling the horse's feet.

This week has been spent reviewing just that. Desensitizing which for Brass is a continual process, and moving the feet through exercises that take him forward, backward, left and right. Control the hindquarters where the engine is and you can do anything. Brass is very quick and athletic and when he yields those hindquarters he wastes no time! But he is very responsive and knows what he is supposed to do, and that is listen to the leader who will keep him safe. Listening to the leader saves my bacon when he becomes reactive over something as it lessens that flight instinct that lies within him.

And of course the question arises as to why it's an issue now when it wasn't a couple months ago? I think because over the frozen winter a lot of training came unraveled. And he needed me to step up to the plate and do my job, and I just wanted to pick it up where we had left off in December. Only it doesn't work that way, we know that. Brain farts get in the way sometimes. The basics have to be reviewed and the correct responses need to be encouraged in order for respect and trust to be renewed or strengthened. Especially in a horse with trust issues in the first place.

Today we put it all back out on the trail again. In the mighty and cold wind. Up the hill we went nice and calm and on a loose rein, as it should be. I led him over a really rough spot in the trail and he did not hesitate to follow me as the front feet slid down into the hole and his nose sniffed the dirt. He got lots of rubs and good boys over that one. Later he jumped once and came right back to me, no problem and we rounded off the incident with forward and backward. At another point where he became anxious it was circles, zig zag and half circles. Left rein, right rein, backward and forward. Pat and Zazu just sat there and watched as we maneuvered around. He figured it out and then as Pat and I talked he became more relaxed and so did I, and all was well. No trailer confusion, no issues. Hooray! Will we have problems again? Probably. But by working on the issues we should be able to overcome any obstacles that get in our way.
Posted by Karen B at 1:34 PM 5 comments: Links to this post

Brass as my Teacher

This is not an easy blog to write, yet it is one that I must try share. A year ago when I saw the movie "Buck", he said that what one would learn through horsemanship would overflow into your life and relationships in a way you never knew possible. I have considered this many times and thought I understood. I did sort of but not really - until.......... 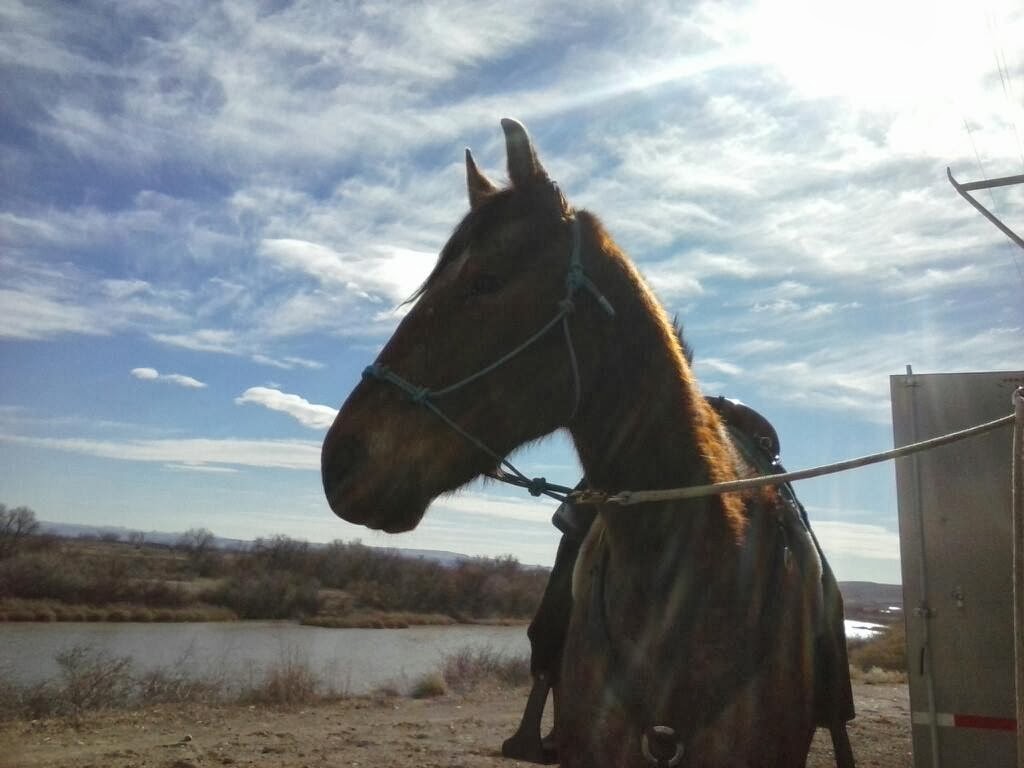 Monday - President's Day. A day off work. Glorious weather. The slick mud was drying out. It was time to get The Big Brass out in the hills, which we hadn't done since the December snows and deep freezing weather began. And since it had been two months, I was excited to get out but also a bit apprehensive wondering how much of this green horse's training had come undone with a long break. Yes I had ridden him in the round pen and pasture, but that's not the same as out in thousands of acres.

Right from the get-go Brass had an attitude. He hesitated about coming up to me for the halter. He hesitated about loading in the trailer. I am sure he could sense my small insecurity. Once on the trail we were doing great. After a few miles we came to some slick sticky footing and I was off leading. I had intended to go straight out to the road but the footing on this little downhill looked good so I decided to try it. You know, I know that look in a horse's eyes when he says 'Really?" But I went anyway, thinking if he slips a little it'll be good for him, he has to learn how the feet work. He slid a few steps but nothing bad in my eyes. (Mistake one.)

But then at the bottom of the hill along the powerline, suddenly he wanted to take off. The one rein stop worked beautifully and onward we went. I thought he was just wanting to take off and go, and I made him walk and settle down. Later we got into more sticky and a bit deep footing. As long as I was using one rein at a time and taking him left then right, he was fine. But my mind forgot he was green and inexperienced horse for a split second, and I made the mistake of giving him slack to pick his way. (Mistake two) He lunged and was gone! I was looking right between my boots in mid air and watching him leave. A few cuss words escaped! I was fine, ground was soft. Caught my horse. Blamed myself. And figured that was my lesson for the day. Wrong!

After the ride he would not load in the trailer. I spent 45 minutes at moving his feet, doing all the horsemanship things I knew how to do, rewarding every try, but not getting him in. I was hot, tired and confused. He knows how to load, we have been doing it for months! OK fine, give in, call Ted. Recall Ted Nicholes is the guy who trained Brass and helped him overcome many of his issues. Obviously I was doing something wrong. You know I have never "worked with" a trainer in my life but this guy is a God send! The whole family is really.

Anyway - Ted to the rescue. Ted said it took him a good 15 minutes to re-establish leadership with Brass. I had the poor horse all confused. And by the time he was getting him in the trailer again, Trish Frahm was back with her second horse. I said no worries, I'll just ride Brass again after this trailer lesson. Ted loaded him up twice, I loaded him up twice and it all seemed good. I was thinking that I had not rewarded every try, that I had misread some signals. Mr Brass got to go around another loop of trail. He wasn't tired anyway, and there were several times that when Thunder was younger I'd do double duty on him to correct issues. It was good for both Brass and I to go back out again.

So back up the hill we went. We had our ride, it got cold and windy, we loaded up just fine, and went home. But Ted, bless his heart, continued to analyze all of this. Remember he knows Brass very well. Ted believes Brass is not a horse that wants to be the leader, he doesn't want my role as leader, but he questions my leadership ability. In other words if I direct him into the cave (trailer) will there be a monster in there? Am I able to protect him? A leader has to be capable of more than direction but also able to give others confidence in their role.

Out on the trail when I gave him his head I was telling him to find his own way through the mud. Yet he didn't know how because he didn't have the experience. He looked to me for guidance and I let him down. And now he doubts me, he has lost confidence in my ability and he questions my worthiness. He has lost trust. WOW! I have been riding horses for a lifetime and this horsemanship stuff that I have been studying for years via Tom Dorrance, Ray Hunt, now Buck and Clinton Anderson, all through Ted, has suddenly shown me I don't know squat. Other horses have been more tolerant of my lack of ability to lead. Thunder recognized it and just wanted to take over and be leader all the time which often led to a battle of wills. And I know now that because of my lack of  adequate leadership and Thunder trying to be the leader that is just how we got into that huge wreck years ago! But Brass and his background makes him different. And he has driven home not just this lesson but one more that hits me hard! I am the same way! OK so maybe you knew this about me, but I didn't. But I question people's ability to lead, not because I want to be the leader, but because I think they are going to misguide me and I'll mess it up. And then I do mess up because of my lack of trust. Oh and this goes farther back when I recall really tough times and didn't even trust God to fix it. I just got mad and quit talking to him. While later I overcame the anger and defeat, and surrendered all to God several years ago, this lesson just now hits home!