What better place to finish up Thunder's 5000 AERC miles than at Outback Hallelujah Trail multi-day! Gorgeous trails, wonderful footing and big loop rides with very little repeat. Extremely refreshing! And then to be able to top it off with our special accomplishment of 5000 miles among good friends, well it just doesn't get much better. 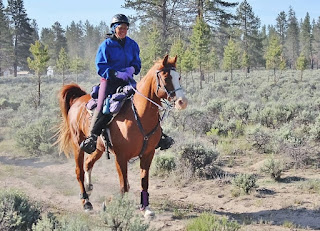 The first day started out cool with frost on the ground and ice on the water buckets. Thunder was full of himself and acting like a stupid kid, a few people thought I must be riding a new horse and it couldn't possibly be the one with all the miles. We circled, we zigzagged, I tried all sorts of stuff and then finally did what usually works. Got off and led him until he settled his silly bad self down! Then I got back on and we trotted on down the trail. He still had attitude but not as much! We only had a few miles left and he saw two horses ahead and just had to pass them. I tried to convince him to eat grass and just chill but no way. So with about 2 miles left I told the gals ahead that we were coming around. Thunder cantered by and kept on going to finish 8th. 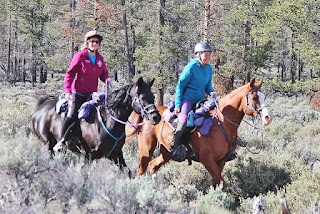 The second day we rode with my friend Trish Frahm. Thunder loves her mare Sahra and waits for her. So we had a much calmer ride as Sahra set the pace to suit herself. Different people kept asking me "How many miles do you have on Thunder now?" I knew if we finished that day we'd have 5000 but I didn't want to say anything for fear I'd jinx us. So I'd mumble something and wander off. HA! But when we were vetted through by Cassee Terry DVM at the finish I said, "Yeah he got his 5000 today!" With an 8th place finish.

And just because we could, we rode the third day also. Lots of gates on this day but some nice trails. The vet check was in a shady Pine grove and Thunder chowed down happily. We placed 6th all by ourselves and had a great day! 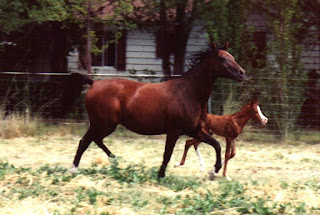 From the time Thunder was born he knew he was important. He said "Look out world, here I come." I owned his sire then, Z Mufaurwa, who now stands at VanGilder Arabians. His dam, Rushcreek Hollie, was my pick for the mother of my next endurance champion. I picked the oldest bloodlines as close as I could find them. Hollie had over 25 lines to the great war mare *Wadduda 30, imported by Davenport. Like any good horse it seems we had setbacks. Surgery on a leg that was developing crooked and later required special shoeing. A setback in training as we had a wreck in the Owyhees and he ran free for 6 days before being found pretty much unharmed. We persevered and with the help of great friends and the good Lord, Thunder and I made it to goals I thought we never would.

I can truly say "Hallelujah we made it!"


Posted by Karen B at 7:34 PM No comments: Links to this post