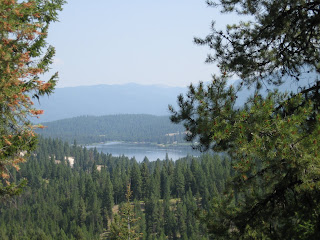 Hey are you riding PF?

Oh it's the Pink FlamingoEndurance ride.

Really? You riding a Flamingo?

No but there are flamingos in camp.

Well is it a bunch of Florida transplants having an endurance ride?

No but there are a few dressed up like flamingos.

Are you herding Flamingo's?

The Pink Flamingo Classic is a great fundraiser for Breast Cancer, via an endurance ride and fantastic raffle. There are awards for the best decorated campsites and the best costumed flamingo rider too. The ride takes place in the hills near Cascade, ID., south of McCall. A sign at the edge of camp reads "Release your inner Flamingo!" I've ridden it the last two years but only one day. This year - I really wanted to ride both days. It wasn't a two-day 100 but in my mind it had to be a 2-day 100. That way, I was committed to both days unless something came up to really stop me. In order to be successful I had to keep my horse sound and healthy AND not get off trail. 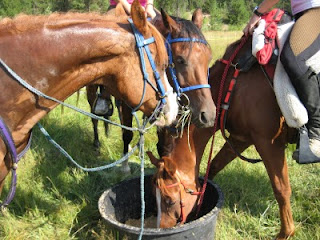 The first day I rode with Carrie on the horse she bought from my daughter. Kinda strange traveling alongside the horse that Al had only wanted to see Andi ride before he died. A dream that never happened, and I found myself hoping he was watching his horse go down the trail. Thunder and Crusty trotted along well together and Carrie and I were having a good ride. The trails were beautiful, the footing was great and it was a gorgeous day. Only her easyboot that she put on was twisted and the cable too tight and it was pinching Crusty's heel bulb. So she cut the cable, and rode him barefoot the last loop.

I went on ahead and rode with Layne and Jenny. Almost missed a turn, thanks Layne, she put me back on course. This was the first time I'd ridden with Layne on Harley, who happens to be Thunder's only son. Harley is the chestnut who's head is in the feed tub in the picture. Harley really trots out, spooks and is as silly as his dad! Amanda was just leaving the creek as we arrived, and she decided to wait for us. Good thing too or she would have missed the great kodak moment of Harley laying down in the creek with Layne. Oh that was so funny we laughed all the rest of the way in! Layne had one wet shoe and one dry shoe when we all crossed the finish line!

Day 2, my horse looks great so I ride out with Bob Lund. I wanted to go a bit slower than our 6 1/2 hr time for day 1. Bob's horse is tall and has a huge stride but he wanted to slow down and we had a good day. I missed a couple turns but never went far, just not watching close enough I guess because they were marked! Somehow the hills didn't seem quite as long on day 2 and again the footing was great. The creeks and water stops were so nice, and the little lake was gorgeous. We finished the second day in 7 hrs and 50 min so I was pleased with that. Thunder looked great and his Easyboot Gloves hadn't budged a bit.

The woods are so cool and lovely that I really didn't want to head back down to the valley in the heat. An extra day would have been so nice but I had to work Monday to support my endurance habit. :-) However, I will go back to Cascade and ride the Pink Flamingo next year!

Posted by Karen B at 9:08 PM No comments: Links to this post