Red - tude? In case you aren't familiar with it, it's that go getter attitude that seems to belong to those dang redhead horses. Thunder is a pumped up, get outta my way and let's go kinda guy. I can grumble but he just finished out his AERC 6000 miles so I couldn't be more proud. The crooked legged beast just gets the job done! 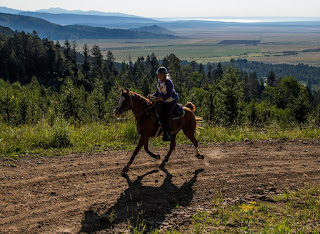 We got off to  a slow start this year but after my wisdom tooth misery we made it to Top of The World and rode all 3 days. Photo by David Honan.
It wasn't my intention to do all 3, I planned to do 1 and 3 and trail ride with my BFF Colleen Martin. But Mike Cobbley said, "You have to ride day 2. It's the best because we ride up over the Continental Divide and it's really pretty." So OK I'll do days and two and trail ride on 3. Well the red beast was so rotten the last few miles in, trying to dump me, spooking and tossing that big white nose in the air saying "nanner nanner", that I told him he just bought a ticket to day 3! Made him happy because he was a bigger jerk the third day than he was the first! HA! Typical Thunder. 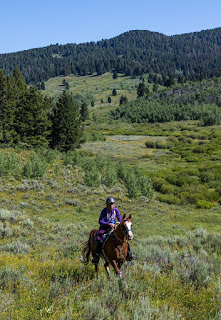 The next ride coming up was Old Selam and my daughter, Andi, decided she wanted to finish up her 5000. I gave her the choice of riding Blue or taking Rio on his first ride. She chose the big spotted beast vs the little scrawny grey. They did just fine although the first couple miles was a bit intense. It got really hot but everyone just kept a trucking up and down the hills. The completion of 50 miles at Old Selam got Andi her 5000 and Rio's first 50. And Thunder finished that 6000 and started the next 1000 miles because he isn't done playin yet! 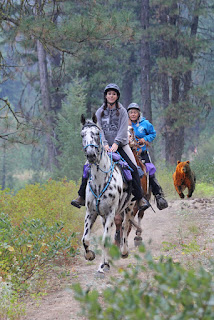 Posted by Karen B at 11:52 AM No comments: Links to this post