Summer came and went. I rode here and there and every where. I neglected my blog as I played with horses all through the fall and into the snowy weather. So now, since it's 26 degrees and dropping frozen rain drops on top of yesterday's snow, perhaps I'll get a bit creative. 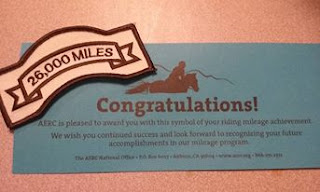 Somewhere during summer my AERC patch for riding 26,000 miles on rides arrived in the mail. That doesn't include fun rides, trail rides, conditioning or goofing off rides. Just sanctioned AERC endurance rides. 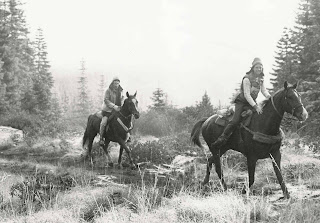 I started this crazy activity in 1977 on my pony horse from the track, Sunny Spots R. At our first ride a vteran rider told me that Sunny would never make it because he was too big. Yes he was 16.2 and weighed 1250 pounds and I retired him from endurance years after that with 4,410 AERC miles and many awards. This photo was taken by Gene Peterson at the very first Sun River 100 where we placed 4th on our first 100 and rode with Nancy Cox on Rakar. And yes that is a bit of snow on the ground. 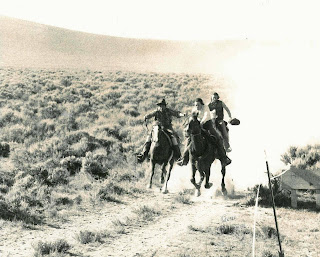 Endurance riding has led me to many places and taken me on some fantastic adventures. In 1979 Lew Hollander hosted a 150 mile ride, and several of us said "Why not?" Took us around 27 hours and as we were heading for camp the horses trotted faster and faster. Someone hit a canter, then someone had a gallop and before we knew it the race was on! People couldn't believe we'd race in after 150 continuous miles but there we were, and the fever was contagious as we ran for home. The winner, Hanne Hollander, and 2nd place, Dodie Eason, were already finished so we placed third, Gene Carpenter was 4th and Arlene Morris took 5th. One more rider, Arthel Westlake, behind us crossed the line about 20 minutes later. We made history on the first ever 150 mile ride in AERC! 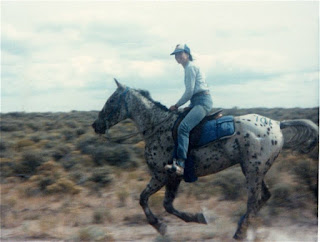 And then, just in case doing a first continuous 150 mile ride wasn't enough, I turned around and did it again a few years later. This time on "Speedy" aka Moka's Pat-A-Dott. And we did it in just under 24 hours. :) He was also the horse I finished Race of Champions with after two failed attempts with Sunny. Speedy was an incredible mount, with unbelievable stamina and epitomized the word tough with 23 one-day 100 mile completions and his 150 miler for a total of 5515 AERC miles. 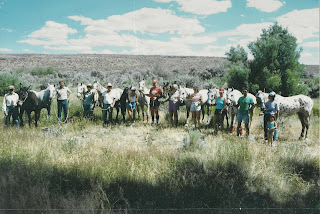 A couple years later "multi-day" rides were introduced. This is from the Lost Wagon Train Ride, Vale to GI Ranch and on into Alfalfa, 6 days and 310 miles. Now that was an adventure through rocks, ruts, past pioneer graves, across rivers and over mountains! Absolutely amazing! A total of 13 horse/rider teams did the whole thing! I was looking for a picture of old Tonka and he is here in the group shot, second from left. Yes he was 14.2 standing next to 16.2! But he was one tough guy and had also been my track pony horse. He is a story all on his own but he had 1895 AERC miles and was sound till the day he died at 37. Sunny on the left with 4410, Speedy on the right with 5515, and Chollima, Al's Arab, had 3105 AERC miles. That's a lot of miles in one photo as these 4 horses represent 14, 925 miles. Doesn't count Tonka or Chollima's Ride & Tie miles either - that again is another story. 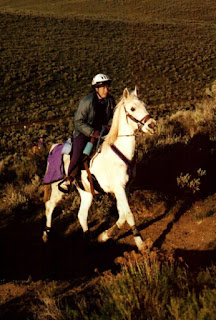 The good Lord blessed me with more great horses than I have good sense. Here is Zapped+/ on his 100th completion in 2003, 6,480 AERC miles, 19 one-day 100's and two complete multi-days. An awesome horse that was a bucker, Al got him going and I stole him. We became one of AERC's first Decade Teams! He was tough to ride but I was younger then so it was OK. 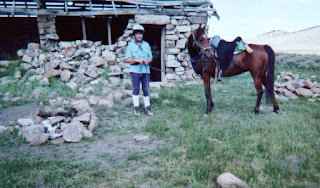 Cold Springs XP, another multi day adventure in 2004 with Rushcreek Faroan, a granddaughter of Rushcreek Mark. An amazing mare that I hated to sell but life predicted I must. She completed 1,085 miles and on our second XP she was the 5 day winner and BC horse! 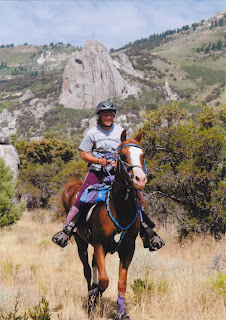 And then this red beast has become my signature horse in these later years. Z Summer Thunder, from my Rushcreek Hollie. He dang near killed me once and my friends searched for him for six days in the Owyhees. Regina Rose found him and brought him home and a few months later I was riding the bonehead again. We've completed over 100 rides and 5,680 AERC miles. We haven't competed on the 100 milers so much (hey I'm not as young as I once was) but we have done a lot of multi-day rides. Plus he is my second Decade Horse and we've won so much stuff it's mind boggling. 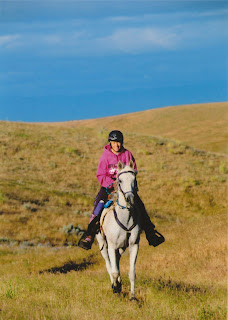 This is my favorite picture of Z Blue Lightening. He looks so much like Zap it's uncanny, even has that little twist to his nose, ♥. I bred and raised Blue from Rushcreek Carrye, and he has always been shoved to the back by his demanding relative, Thunder. It seemed like every time I'd plan to take Blue to a ride Thunder had scuffed him up, kicked him, bit him or something, and then Thunder would get to go to the ride. Many of my friends have ridden Blue on rides, he's my "dude" horse. Lazy as can be on a training ride but full of himself at an endurance ride, a little schizo. Even at that he has managed to travel 1,830 AERC miles. Maybe in 3 years he'll be a Decade Horse too! 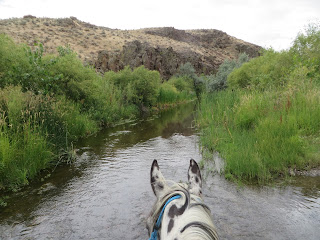 Some other fine horses have been sprinkled throughout my riding escapades. I even rode Les Carr's famous Tulip on a ride! Endurance has allowed me to ride in so many places I wouldn't have other wise, it has given me sensational adventures, and has also introduced me to many friends. AERC says I've ridden 338 sanctioned rides since 1985, that doesn't include all my pre-1985 rides as I already had 6,190 miles when AERC began to track with computer data. With the last few years the spotted horses have returned to my life and with them came some new goals, like the Chief Joseph ride.

Ariding I have gone - and ariding I will continue to go! See you some where on the trail!