Shortly before I was to leave for the Chief Joseph Trail Ride, I got a call from Gene Winchester, an Appaloosa breeder in Homedale, ID.
Gene says, "Karen I have a gelding that you need to come look at."
"But I don't need anymore horses Gene."
"Well you really should come look at this one." Gene says.
So of course, me being "me", I just had to go see what was so special about this one. Curiosity killed the cat as they say. I tried to resist but it's futile, I contacted his son Elgin and made arrangements to go look. 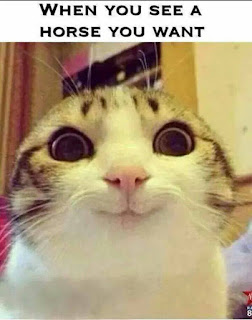 I got there and didn't see Elgin so I just showed my self around. I've been there enough times I know several of the horses. But there was this one horse that just gazed at me. He watched my every move. I went to see him, scratched him and saw that he had shoes on. "Oh you must be someone's special boy." I told him. And then I went to look for the mystery horse, taking pictures of different geldings. But every where I went those eyes were staring at me. He was just giving me that lost puppy dog look! "Take me home!" 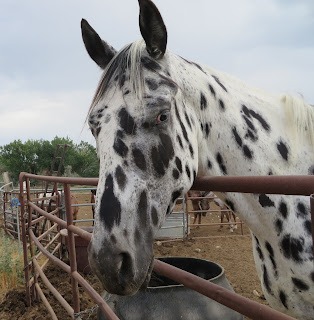 Just about the time I was getting ready to leave Elgin shows up. I asked him who the big gelding was that wouldn't stop staring at me. "Oh that's the one Dad wanted you to look at."
"And what makes him so special?" I asked.
"He's old Lever Action breeding, Dad said you liked old LA."
OMGosh! Not only did I like old LA, I loved that big black & white horse! I had his last daughter, my beloved Diamond, and lost her. I cherish my Peanut because he is an LA grandson. So I tell myself not to get too excited and try to calmly ask, "So is he a son or grandson or what?"
Elgin says, "His mother was a Lever Action daughter, a really nice black & white mare. This guy is really gentle and has some training." We talked a bit more and I left with Elgin asking  "When are you going to come get him?"
In the meantime I learned that his name is Owyhee Justice. His mother was my Diamond's older full sister! I find it interesting that out of all those colorful horses, I had spotted her nephew. And he had made sure that I would keep coming to see him by giving me that intense stare. 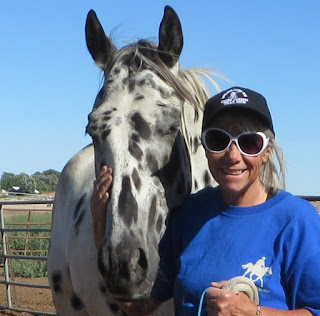 I went back to check him out closer after I returned from CJTR, where I'd spent a week of watching over 125 Appaloosas and riders retracing the historic Chief Joseph route. My friend, Trish Frahm, went out to the farm with me. Her reaction was "He's huge! But he's so cute. Should we get my trailer, it's closer." Ah, what are friends for anyway!

The next day I took the trailer, picked up Trish, and off we went to get my new boy. He almost put the halter on himself, he was definitely ready to go home. It only took us a few minutes to load him up and off we went. 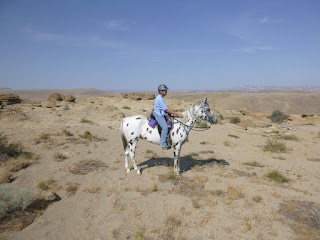 Trish went with us for our first ride on the hill too! And he loves her black mare Sahra. 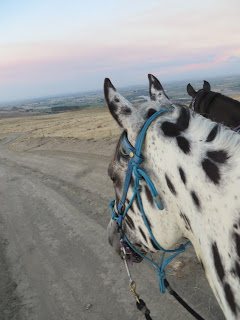 Since the first ride I have nicknamed him Rio.  He has a lot to learn on trails but is smart and fun to ride. I just have to find a high spot to make it easier to climb up on the almost 16 hand horse. So Rio is learning to be "short broke" as I call it. They have to get where you can lead them up to stuff so you can get on! HAHA!

I'd had Rio for a couple weeks when we went for an evening ride and it was when the Soda Fire was burning. We were treated to a gorgeous sunset early in the evening. 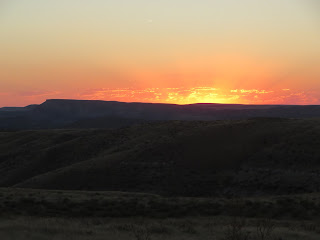 As we headed home and down the hill we could see the fire burning 20 miles away. 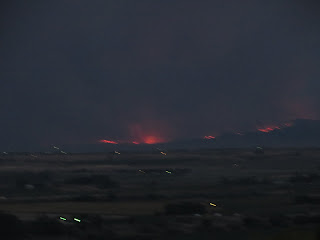 People ask me how I like my new horse. My answer? I think I'll keep him for awhile! ♥