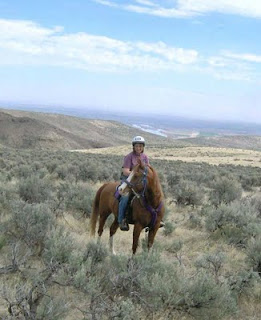 Is it just me or do these lovely red chestnut horses truly believe the earth revolves around them? I can be brushing a grey horse and suddenly it turns into red hair. "Hey didn't I already brush you?"
Some call them chestnuts others classify them as sorrell, doesn't matter because they all have a superior attitude and just "know" they are the best. Their eyes reveal an intelligence that no horse should have, I mean they are forever outsmarting us. Thunder thinks of things to trip me up, and I have to think of ways to convince him that what I want was really his idea in the first place. In the herd they have to be first through the gate, first to get their hay, they need to be first at everything just like a border collie.

When Thunder was born I instantly knew he was "my" horse. A unique connection existed. I could feel this one was special. On his web page I placed the old Arab proverb of: "If one tells you that he has seen a horse fly in the air, ask what color it was. If he says Chestnut, believe him." Thunder absolutely resembles that remark. I call him my flying carpet.

The red horse is noble, demands attention either by being a pain in your bum or just by his regal stature that catches everyone's eye. I remember Merri Melde saying about Thunder, "Oh he's beautiful." I quickly whispered back, "Oh please don't tell him that, his ego is already far too big!" I think he heard me because minutes later I was in the dirt - but that's another story.

I swear Thunder is the reincarnation of my big beloved red horse, Sunny. That horse was the most mischevious animal that ever walked the earth. No gate was safe unless it was chained and padlocked. When tied to the trailer he would undo two lead ropes and be gone. If a buddy was at the trailer he would untie him too, after all it's more fun to escape with a pal. Sunny would buck evey morning upon entering the racetrack with his fourth "pony" of the morning. One morning a friend asked to borrow Sunny as his pony horse was done for the day, I said sure. He came back and said "Man this bugger can buck!" I calmly counted one, two, three, "Yup that was his fourth one for the day, he always bucks on that one!" He didn't buck on the others, just the fourth one.

Another red horse, Domino, was an amazing athlete, also opinionated and mischevious. He and Andi had a brother/sister relationship. He'd see a mud puddle while trotting down the trail and aim for it, slamming a hoof down in the middle of it and spattering her with mud. She'd reach up and tweak his ear. I actually saw the two of them stick their tongues out at each other!

The redhead is a challenge but in the long run they are amazing horses. Thunder will never be truly trained or broke, and don't even think of him as a mode of transportation. Over the years I have learnt that Thunder is not my horse. It's more like I am his human. It is my duty to be his slave and he rewards me with a treat, a magical ride upon his back. And together we get to see many places and travel as one.
Posted by Karen B at 8:34 AM No comments: Links to this post 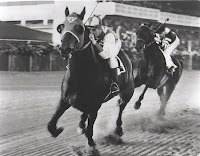 Can you imagine a race that would round up the best horses in the history of Thoroughbred racing to run against one another? What a match race that could be!! Of course it never will happen other than in my imagination. But think of the greats, all lined up, snorting, stomping, waiting to break from that starting gate.
In true reality, over the years there have been few truly GREAT Throughbred race horses.
Only 11 horses have won the Triple Crown in 89 years of racing, with the last being Affirmed in 1978. And if you look at the stats, some of the greatest horses never even won the Triple Crown. Man O'War, Seabiscuit, Zenyatta, to name just a couple.
Match races, the practice of one man's horse against another, was common place in the 1800's. In 1938 the race between War Admiral and Seabiscuit was billed as the Greatest Match Race of The Century. Two very accomplished and well matched athletes. One a Man O'War son, the other a grandson. Those two horses moved stride for stride, side by side, in perfect tune with each other down the back stretch. With the outcome being Seabiscuit by 4 amazing lengths! Interestingly enough, Man O'War was victorious in 1920 in his match race against Sir Barton.
The interest in match races dwindled after the 1950's. And I'm not sure there has been a major match since the tragic race between Ruffian against Foolish Pleasure.
I look back and have to ask myself, could todays champions hold a candle to those who raced 50 or 60 years ago? Who would be the real victor? Would the horses of the past be even faster in todays environment of better training, feeding and management skills?
Would the horses from back in the day run circles around our modern thoroughbreds? Or would it be the other way around? You can't compare race times because there are different factors for each day, and timer malfunctions such as with Secretariat at the Preakness. Could Secretariat and his 31 length win at the Belmont compare to Rachel Alexandra's victory in the Oaks by 20+ lengths?
Oh and the money! The big money earners get bigger each year. Compare the very first Preakness purse of $2050 to todays Breeders Cup Classic of $5 Million.
All of this is merely a mystery. A fantasy race in my mind of the greats from the past against the best of today. It's not much more than comparing apples to grapes I suppose. But it is something a lot of fans can't help but wonder from "Horse of The Year" - year after year.
The result will always be "I wonder if......". Meanwhile we just have to admire each horse for what he/she is on their own merits.
Posted by Karen B at 8:58 PM No comments: Links to this post