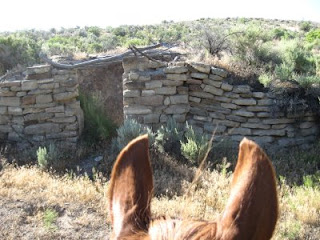 The ears are my two point gps system, high tech stuff right there!

It was the coolest old dug out, flat rocks laid in there horizontally to build a smooth solid wall. The poles over the top were supports for a sod roof. The dugout was near the banks of Hart Creek, and upstream was an awesome cave with a sign mostly covered with brush. I had to see what it said. It read "Oreana Savana". Not sure exactly what that meant. This was just one of the many sights at the Almosta Bennett Hills ride at Oreana.

The Bennett Hills ride was planned for the Gooding area. To make a long story short, it got rained out and John & Steph Teeter stepped in, offering trails and camp and much more just 5 days before the ride date. WOW!

I rode Thunder day 1 on the loop that left Oreana and climbed up to Toy Mtn. Sego lilies decorated the landscape along with a few left over Indian Paintbrush, Lupine, and Arrowleaf. It was a 50 mile loop - HOORAY!!! - with an out vet check and it was a wonderful reminder of the old days of endurance when you really had to ride coyote smart. I rode with my friend Linda and we had a blast! The horses had lots of creek crossings with good water. A bite of grass here and there. Even though it was the mid 80's the last few miles Thunder had to throw in some power spooks to be sure that I was still there and maybe I'd let him go faster? Not! We finished 8 and 9, snapping pictures of cool rock formations and scenic vistas along the way.

Sunday was day 2, I was going to ride spooky Thunder another day. Linda opted out on her mare but rode Blue on his second 50. He had spent all day Saturday having a fit in the corral in camp wondering why we had left him there. So he was a happy camper trotting down the trail Sunday after we got the first spook out of the way. We had a 25 mile loop that zigged and zagged over to Hart Creek and over little hills, rocks, sagebrush, through the creeks, past the homestead, and back to camp. After a vet check and an hour hold we were to repeat the loop in reverse. Only our hour hold was more like a hour and a half. it went something like this: Merri asks me, "Hey Karen aren't you guys going back out?" I answered "yup at 11:19." She said, "well you're late, it's 11:31!" Oh well, the extra time for the horses to eat and drink wasn't a waste as it was heating up and they'd need the energy. It heated right up to 95. And I am sure the water in my bottles was 120+! But we finished and the horses were in great shape and hungry but then Thunder is always hungry. We were top 10 and "turtle" all at the same time too.

Here is a link to more photos: http://picasaweb.google.com/zap6000/Almostabhills

It was a great weekend and those that missed it really missed some good trail and that nice 50 mile loop! Classic endurance stuff there. I love it!!!!

Posted by Karen B at 8:33 PM No comments: Links to this post 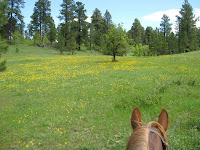 Little did I know that when I bought a grey Arab gelding awhile back to resell that it would lead me to Wyoming. But a rancher there wanted a grey Arabian for riding fences and sorting cows and by delivering him to Wyoming, I got a vacation. Not just any vacation but a journey to the Black Hills of Wyoming. Yes I said Wyoming, the Black Hills continue to South Dakota. This area of the Black Hills is known as the Bear Lodge range.
On my adventure to the Rauth Ranch in Alva, WY. I got to see 950+ miles of amazing country. And I think there was every kind of weather too. Years ago going to the Race of Champions we had traveled the big Horns, Cody and Yellowstone, so I opted to take the faster route this time. 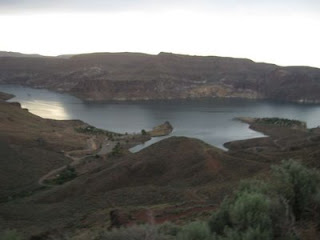 Those evasive bulls beat us again. We trailered out to the far side of Owyhee Reservoir, drove up a tiny dirt road and set up the catch pen where Cherry Creek drains down. Joe knew where the bulls were so he rode Thunder with Josette & Joey and they headed up the creek canyon. Meanwhile Linda rode up Indian Creek Rd to scout off the hillside and look for the bulls. I watched the gate - hey it's a tough job. :-) Linda came back and said that she had spotted one of the bulls up around the bend. But Joe and company came back later without anything. He and the dogs had traveled much of the creek bed and nothing moved out. The thick brush conceals the creek, much of the grass and anything that wants to live in there. Including two Angus bulls and a rattlesnake that we didn't stop to make friends with. So after failing at bringing them in and loading the panels back in the trailer, Linda and I decided to ride back to the ranch. Yup it's a long way, yup it's going to get dark, but we didn't care.
Linda and I rode up Indian Creek Road with Owyhee Reservoir behind us. The Reservoir is 25 miles long through the Owyhee Range and attracts many boaters, fisherman and campers. It's a 5 mile pull to the cattle guard up near the top of the hill. The horses were busy eating grass and we were eyeing the gorgeous wildflowers ranging from a neon Blue to pink to bright yellow. We saw a nice little doe and as we climbed higher and could look down into the Cherry and Birch Creek confluence, there was a bull. Yup, Linda had spotted one earlier and then when they came back empty thought maybe she'd just seen a big rock. But this was no rock, definitely a bull. Now out in the open, uphill from the creek and the brush, laughing at us. The trailers and all were gone so we continued on our way, enjoying the ride, the view and watching for more snakes.
As it began to get dark the moon rose up and between it and mother nature's fireworks, lightening down south towards Three Fingers, we had a decent amount of light. Not enough to stay on the faint brushy trail along Alkali Creek that would take us over near Blackjack Butte though. We weren't lost, we just weren't where we needed to be. We knew where to go, but we couldn't get there from where we were. From the hilltop we could see all the city lights from miles away, from Ontario down to Homedale and across to Boise and bogus Basin. What a sight. But our landmarks that we see in the daylight, the Snake River, the canal, roads and the bridge, were all hidden in darkness. So we worked our way back towards the powerlines, knowing those would take us down to Succor Creek Road. It was warm and beautiful and the moonlight. We'd trot where the footing was good but that wasn't a lot. Pretty rocky country out there. As we got closer to the powerlines we sent Joe a text message that read "powerline p u". It took about a mile till we got a strong enough signal for it to send but he knew what we meant. And he picked us up where the powerlines meet up with Succor Creek Rd. He even got there just a few minutes after we did. It was 11:45 PM. My goal is to be home by midnight - missed it by just a bit this time. But what a fabulous ride we had!! Hey we're ready to ride in the dark on that 100 miler now!!

Posted by Karen B at 4:31 PM No comments: Links to this post